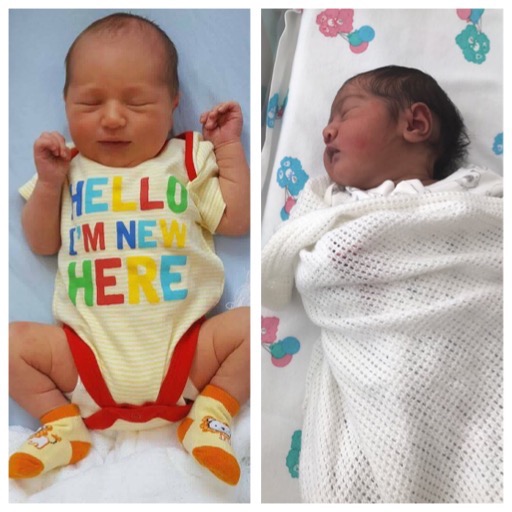 Posted at 16:03h in Uncategorized by Sharon and Shelley 0 Comments
0 Likes

Our little girl Amira decided to arrive a week early on 15th September 2017 weighing 6 pounds 12 taking us a little by surprise. Everyone always have an idea of how they would like their labour to be and like lost people I had a birth plan. I had planned for a natural delivery with minimal pain relief. However things did not go plan. As my labour progressed the midwife checked to see how far along I was and it was then that she realised that Amira was breech. As my water had broken before having contractions the medical team advised me that a c section would be the best option in terms of making sure Amira was delivered safety. Even though I was not prepared for a c section the team made me feel at ease and they were amazing at explaining everything to me and my husband. I was so lucky to have an all female team which was something that was really important to me and even though not everything went according to my birth plan the midwife doctors surgeons nurses were amazing and that’s what made my birth experience a positive one !!!

My mum was convinced I would give birth at 37 weeks because her 5 babies were born at 37 weeks and my bump was bigger than any of hers so ‘baby must be ready!’
So by 37 weeks I had finished work, printed off my visual birth plan, with plans A, B, and C, and packed my hospital bag ready.
37 weeks came and went, then on my due date I watched Eurovision whilst eating spicy food and drinking pineapple juice.

Finally, 5 days later I started to feel something at 7.30pm. Twinges on and off.
At 7.30am the next day I woke up to more twinges and a show, and that’s when I got excited! I told my husband, Dan, to go to work and I’d keep him updated. I timed my surges using an app and kept sending him screenshots throughout the day! At about 1pm the surges were getting pretty uncomfortable so I called Dan to come home. I’d been spending the day rocking backwards and forwards over my birth ball, breathing through the surges and hoping baby wasn’t still back to back.
Then around 7.30pm I had a shower to help with the discomfort but got out and was like… nope this is it! So we rang hospital but they asked me some questions and decided I didn’t sound ready yet so to wait until contractions were worse or my water broke! But 5 mins later they were already worse and I realised my waters had actually broken but I hadn’t noticed because I was in the shower when it happened! So we rang the hospital back and told them we were coming in!I was a little nervous because we’d planned on going to LGI but they were full so had to go to St James, where I hadn’t seen the delivery rooms, and wasn’t sure if they had enough birthing pools.
The journey to the hospital was very uncomfortable because obviously I was strapped in so couldn’t move around! And I started worrying that I hadn’t felt enough baby movements.So once we reached hospital, I got hooked up to the monitor and found that baby’s movements were absolutely fine but my blood pressure was high so I had to be monitored, laid on my back, for about an hour. That was by far the worst part because I just wanted to get upright and move around.After my blood pressure had stabilised they then had a look and feel at how dilated I was and the midwife said “I think I’m going to have to check that again because I don’t quite trust myself – I can’t feel any cervix at all! You’re fully dilated!” So I said “Ah cool. Do I have time to get in the birth pool?” And they said yes and they went off to fill one. Then they unstrapped me and got me a wheelchair and wheeled me to the birth room.

That’s when I started enjoying it

it was all nice and dimly lit and the water was still running so the sound was lovely. I got in as soon as I could as soon as I was in the water I was so comfy. My midwife was brilliant. She’d clearly read my birth plan, which was all about having a relaxing, natural, hands-off birth with minimal intervention so she introduced herself, got me the gas and air and some cold water, checked baby’s heartbeat and then said she’d be in the other room doing paperwork and to let her know if I needed anything. And because I was already fully dilated that it was absolutely fine if I felt I needed to push, and to just go with it. So she kept popping in to check baby’s heartbeat and was really unobtrusive doing it, then when she heard me having a more powerful surge she checked the progress with a mirror in the water.

After an hour, she said we should start a more active approach, with me bearing down more with each surge with her guidance but I asked for 15 more mins to try and get baby moving down more without straining because I was feeling it happen already, just slowly – 2 steps forward, 1 step back.
About 30 mins later things were in full swing so a second midwife came in, ready for the birth. Then after another 15 mins, at 00.29 on Friday morning, baby William was born weighing 9lb 6oz!

I think the last 5ish minutes were PAINFUL but I genuinely wouldn’t describe any of the rest of it as painful, just uncomfortable.
The midwife passed him to me straight away. We had a cuddle and he was soooo chilled out, they said it was like he hadn’t realised he’d been born yet!

It was clear from the water though that I had lost a lot of blood, so rather than staying in the pool for an hour to breastfeed and deliver the placenta naturally before cutting the cord, like I had planned, I had to get out so we could find out what the blood loss was all about and to stop it getting worse.
All that was fine by me and I was happy they’d explained why they were doing everything and even though I had to get out earlier than planned, it didn’t feel rushed.

William had a stuffy nose so struggled to feed at first and it took us about a week to really get the hang of it.

After an hour, I had to go to theatre for stitches to mend my 3rd degree tear, whilst Dan looked after our brand new baby! It obviously wasn’t ideal but on the positive side, I had chance to have a nap during the procedure and the anaesthetic from the waist down was wonderful!

I had to stay in overnight, so while I was there, my parents and in laws came to visit and see William for the first time. We left at around 5pm on Saturday. It felt amazing to put on my going home clothes and to carry William out of the hospital to the car!

Now at 6 and a half months old, William is doing great. He is still breastfed and weighs over 20lb 10oz. And as for my tear, after 12 weeks, the consultant checked and remarked “Well done to the surgeon! I can’t even tell you’ve had a baby!”

I’d do it all again